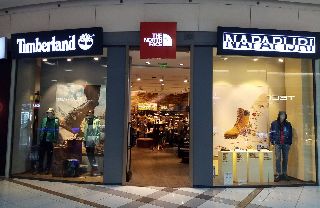 IMBERLAND/THE NORTH FACE/NAPAPIJRI store offers you sportswear, footwear and equipment for hiking by global brands The North Face, Timberland and Napapijri. In the summer will prepare for camping with friends and family and for the winter you will be fully equipped for the ski tracks.

TIMBERLAND
It started 40 years ago with a boot called Timberland.
Founded on quality craftsmanship and Yankee ingenuity, that boot helped build a brand and set new standards in the footwear industry. Its quality, authenticity and rugged outdoor heritage continue—inspiring new collections for today.
Nathan Swartz started it all in 1952 with the Abington Shoe Company in South Boston. His two sons, Sidney and Herman, joined him a few years later and relocated the company to Newmarket, New Hampshire. In 1973, Sidney introduced one of the first waterproof leather boots of its kind. Incorporating premium full grain nubuck leather, thick rubber lug soles and unprecedented craftsmanship, the yellow boot was an instant classic. He named it the “”Timberland””.
Timberland’s dedication to making quality products is matched by the company’s commitment to “doing well and doing good” — forging powerful partnerships among employees, consumers and service partners to transform the communities in which they live and work.
As the cool temperatures skate in, Timberland is making cold-weather adventures look better than ever, thanks to its new collection of footwear and apparel designed to outfit men and women with style, warmth and protection from the elements. Timberland’s roots in rugged and beautiful New England drive its commitment to protecting the environment for future generations – and this dedication comes through loud and clear in the Autumn/Winter 2013 designs. New footwear and apparel is made with renewable, organic and recycled materials, providing men and women around the globe with access to responsible fashion that allows them to celebrate the outdoors – while always looking great.

THE NORTH FACE
The brand was founded in 1966 when the outdoor sports and gear industry was still in its infancy in the U.S. Alpinists were forced to buy heavy military packs, tents and outerwear in Army surplus stores. Nevertheless, a passionate skier with a flair for merchandising, Doug Tompkins with his wife Susie Tompkins, decided to open a high-end ski and camping gear storefront at 308 Columbus Avenue in San Francisco.
In 1968 Kenneth “”Hap”” Klopp acquired The North Face and change the direction of development from retail to manufacturing.The first production facility was squeezed into the back of The North Face® store on Telegraph Avenue in Berkeley. A year later there is a fully developed and functioning factory.
At that time was created The North Face’s logo which we all know. Through the years of development The North Face aims to conquer more and more higher peaks. Creates and uses high technologies that allow professional athletes and fans to be closer to nature, to reach places known to few. The company’s philosophy is promoting the idea of nature conservation.

Napapijri was born in 1987 in the shadow of Europe’s highest peak, Mont Blanc, where an Italian manufacturer of travel bags gave outdoor apparel a new meaning by combining innovative materials and close attention to style. Inspired by the sophistication of great expeditions of the last century and the intrepid explorers who transformed their lives into unique journeys.
From the same category

Go to the H&M store

Go to the Bershka store

Go to the Calliope store

Go to the Fan Point store

Go to the BOSS store

Go to the Massimo Dutti store

Go to the Pull and Bear store

Go to the Teodor store

Go to the Terranova store

Go to the Tom Tailor store

Go to the Replay store

Go to the Zara store

Go to the Andrews store

Go to the US Polo Assn store

Go to the PEPCO store

Go to the Reserved store

Go to the Mason's store

Go to the G-Star store

Go to the Bugatti store

Go to the Collective store

Go to the Pierlucci store

Go to the SINSAY store